I was perusing Facebook, my usual pastime, when I happened upon a photo of someone I was once close with in college. She was an incredible friend, a wonderful person, and what happened between us will likely be among the biggest regrets I will have in life. Very long story short, we lived together in a townhouse one summer and I became friends with some of the neighbors who didn’t really get along with my friend. I was young, I was immature, and I ended up siding with the wrong people in a very heated fight (not physical) between my alcoholic neighbor and his wife and my best friend. I said and did things I shouldn’t have and I lost that friendship. It wasn’t until I moved to the Midwest and was able to look at the situation objectively that I realized how very, very in the wrong I was and how unfair I’d been to someone who didn’t deserve to be treated so unfairly. After some time, I can’t remember how long it was, I finally sent her a message apologizing for my actions and the hurt it caused her. I’ve kept up with her on Facebook and saw that she was recently married. We’re grown-ups now and we’ve both moved on with our lives. She seems so happy and I couldn’t be more thrilled for her because she deserves it.

Seeing her picture tonight is what prompted my Facebook status (and now my post). Here’s what I wrote:

One of the biggest tragedies in life is the inability to go back and right the wrongs of the past. The best you can do is reflect, learn, and move forward. If an apology is owed, give it…even if that apology is to yourself.

I think apologies that come from heart are incredibly important not just for the person that has been hurt but also for the person responsible. We all make mistakes, we’re human beings. It’s learning from those mistakes that help us become better, that help us grow. We don’t get do-overs. What we do get, though, is do-better-next-times. I’d like to think I’ve come along way as a human being than I was back then but I still have room to grow. Don’t we all?!

I’ll leave you with this, a picture of something I saw a few months ago that really moved me. I hope you love the concept as much as I do: 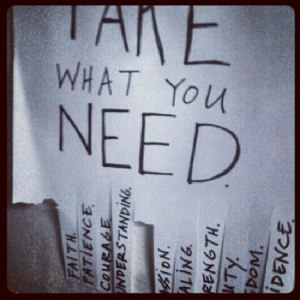