At the suggestion of the husband, I’m starting “Mad About It Mondays” where I plan to share a vent, observation, or anything that really “grinds my gears”. I encourage you to join me by either leaving a comment on this page with your Monday rant or by making a blog post of your own about it and linking back to me. My first “Mad About It Monday” goes to the people with poor parking skills who create problems for pedestrians, police, and paramedics.

Have you ever had something that makes you irrationally angry? Something that really shouldn’t bother you because it doesn’t have anything to do with you and it doesn’t impact your life but it still just pisses you off for absolutely no reason whatsoever? I do and it’s people who park in their cul-de-sac. Yes, I said IN. Allow me to explain…We have a neighborhood somewhat near where we live with a few cul-de-sacs that are right off the main street. I drive by this area probably three or for times a week. Every time, without fail, I see people parked facing their homes in the street. How many laws are they breaking by parking like that? I debated on taking a photo of the actual cars parked on the street but decided that I should probably just make an illustration instead: 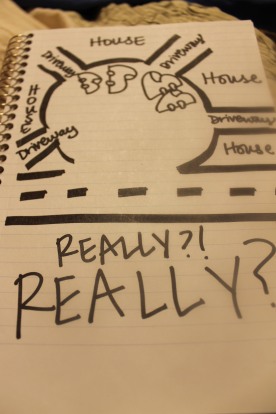 You have GOT to be kidding me. These people HAVE DRIVEWAYS. They have driveways! Where you’re supposed to park! I could understand parking along the curb if you have some strange aversion to using the driveway the way it’s intended but to park the way they do is just outrageous and it’s really dangerous. It blows my mind that they haven’t been given tickets for parking the way they do. What if one of the houses, god forbid, caught on fire in the middle of the night? There would be no way for a fire truck to respond unless all the vehicles were moved out of the way. What if someone required paramedics? It’s so frustrating to drive by and see their ridiculous parking. I’m glad I don’t have to live there.

Speaking of parking…someone in my neighborhood is parallel parked in his driveway. What?! See below:

To his credit, he does have a trailer attached to his truck so I can see that there might be some logistical issues parking both the truck and the trailer in the driveway the way they should be parked but, at the same time, as a property owner in the neighborhood it kind of pisses me off. I would rather see him parked on the street than parallel parked in his driveway with the trailer on his grass. It’s just tacky. Come on, people, we live in a nice neighborhood.

There is a house for sale just down the street from him and I would be livid if I were the sellers. Who wants to buy a house when one of the first things they see in a neighborhood is someone who looks like they came home drunk and didn’t know how to park their vehicle? What kind of message does that say about the neighborhood?! I mean, really. Come on, people. Think about what you’re doing. Parking on the grass is something that has always gotten under my skin because I don’t understand why you would ever want to park on your front lawn (unless you live in the country). We had a neighbor who rented out his house to a family that did that a couple of summers ago. The renter would park his truck on their lawn every day. Every single day.

Poor parking doesn’t end at choosing inappropriate parking spots in cul-de-sacs and parallel parking in your driveway. I, like many Americans, am bothered by people who take up more than one space in a busy parking lot to avoid getting their car hit. What kinds of parking habits piss you off?

4 thoughts on “Mad About It Mondays: Poor Parkers”