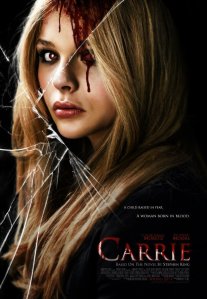 Is this a good movie?  Is it good enough to justify its existence?

These are the two pertinent questions when one considers a remake. More often than not, even if the answer to the first question is “yes”, the answer to the second is a resounding “no”. Such is the case with “Carrie”. The movie is well made, entertaining and (though this may seem blasphemous) superior in some ways to the original, but despite some modern touches it does not offer enough new ideas to be worthwhile.

Ridiculous as it may sound, I watched “Carrie” (2013) having never seen “Carrie” (1976). I am not a huge fan of horror movies, and I simply have not had the opportunity to watch it thrust upon me, nor have I sought it out. I went in with a basic understanding of the movie’s plot in so much as it has permeated our culture. I knew, for instance, that it was about a bullied girl who develops telekinesis and exacts revenge upon her tormentors.  I was familiar with the iconic image of the girl covered in blood. Beyond that, however, I had no preconceived notions of how the characters should look or act.  I believe this aided in my appreciation of the movie. Thanks to Netflix, I have now seen the original as well as the remake.  People who watch remakes after having seen the original dozens of time see every difference or deviation as a negative. Having seen the movies in reverse order, I will say that I think the fleshed out characterization of Carrie’s mother in the 2013 version, along with the convincing performance of Julianne Moore, make the character’s actions at the end more consistent and understandable. I also think that the actor playing Tommy in the new version lends a charisma and innocence that outshines his 1976 counterpart.

With that said, the “Carrie” remake is not good or different enough to answer the question of why it should be made. This story, in particular is a strange choice to be retold in an era of school shootings and violent bullying. If there was a movie where the title character brought a gun to prom there would be riots and protests, but somehow the supernatural element makes it more socially acceptable. Everything about the movie from the mother’s treatment of her daughter, to the bullies’ treatment of Carrie, to Carrie’s ultimate revenge was sad and unfortunate. In 1976 horrific violence at a school event may not have had the same real life connotations as they do now, For better and for worse, it is a different world now, a world where there has been too much terrifying violence enter into our real life schools for me to want to see it in our cinematic ones.