One day sixty some years from now when I’m sitting around a pool, drinking a dirty martini, and enjoying the hot Florida summer I’ll look back on the events of last week and laugh. Then I’ll say to my grandchildren, “When I was your age, see (because, in my mind, all elderly people speak like they grew up as 1920’s gangsters), my skin glowed orange, see, because of this little invention known as the spray tan.” Then I’ll realize that those “grandchildren” I’m speaking to are actually birds. But I’ll continue on with my story, because it really is that important.

“See here, my feathered friend, society had these places we called ‘gyms’ where people went to use machines that made their bodies stronger,” I’ll say, sipping on my beverage, “well one day, my gym got a special machine that sprayed god knows what onto your skin, making it appear as if you’ve spent hours basking in the hot, hot sun.” The birds will look at me, confused at the fact that I don’t have any seeds for them, and inevitably fly away to their flock. But I’ll keep talking, because I’m not one to stop before the story is over.

“Well, old sport,” I’ll continue looking into thin air, “I’d never had one of those ‘spray tans’ before and decided to give it a whirl. The machine was like a tiny awkward shower that yelled directions at you while you stood naked and uncomfortable, see. I was elated. Elated that my ghostly white skin would finally have that healthy summer glow. I was wrong, I tell ya. Wrong indeed. This is something I didn’t realize, see, until hours later.” By this time, the other citizens of my neighborhood have rightly concluded that I have lost my mind and the poor pool boy stuck sitting in the chair next to me as I go on…

“Young man,” I’ll say, “In between the gym and home I stopped at my local Target, an actual building with groceries, toiletries, and an assortment of other items people purchased before the invention of Amazon Teleportation. I assumed the smiles from strangers came from a kind place, that people were just being friendly. It wasn’t until I got home, see, that I realized I’d made a terrible mistake.” 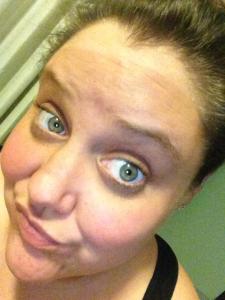 “This tan was not the cat’s pajamas,” I’ll continue, “because I had somehow covered too much of my forehead with the protective cap meant to keep the spray out of your hair. It was awful, see, just terrible. No good. Lousy. The next morning, it was worse. I looked like the illegitimate child of Snookie and one of Willy Wonka’s Oompa Loompas.”

“What is a Snookie and who are the Oompa Loompas?” The very confused, and mildly uncomfortable pool boy will inevitably ask. “Nevermind that, old sport,” I’ll reply, “The fact of the matter is that spray tan machines were no good, very bad, just plain awful.” Then he’ll get up, walk away, and call my family to move me into an assisted living facility never knowing that the events I described to him were true. And very embarrassing.

1 thought on “Adventures In Spray Tanning: A Cautionary Tale”