“This Is Where I Leave You”


We’ve all been there…The moment you find yourself in the middle of a family function and you think to yourself: “My god, we’re dysfunctional” (Oh wait, that’s just me?!). In case you’ve ever wondered what happens when a group of highly dysfunctional, yet incredibly loving (in their own right) members of one family get together, you’ve finally got a chance to find out. “This Is Where I Leave You”. 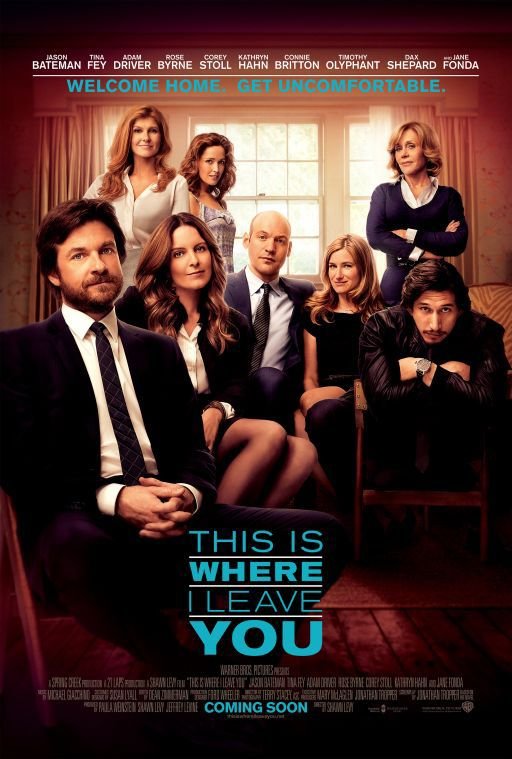 After the death of their father, the Altman siblings (Judd, played by Jason Bateman; Wendy, played by Tina Fey; Phillip, played by Adam Driver; and Paul, played by Corey Stall) are forced to come together for the first time in years.  At the behest of their overly-involved mother (played by none other than Jane Fonda), the foursome discover that they must set aside their personal problems and their differences to spend an entire week mourning the loss of their beloved Dad. Together.

“This Is Where I Leave You” attracts audiences with its cast of really great, incredible players like Jason Bateman (“Arrested Development”), Rose Byrne (“Neighbors”), Connie Britton (“Friday Night Lights”, “Nashville”), Dax Shepard (“Parenthood”), Tina Fey (“30 Rock”, “SNL”), and Jane Fonda (“9 To 5”) but what moviegoers will ultimately love best is the hilarity that ensues when this family gets together.

Within the first five minutes or so of “This Is Where I Leave You”, audiences are introduced to some fairly deep and heavy material from infidelity to infertility but, somehow, the film never seems to feel depressing or gloomy. It becomes fairly obvious that the death of the Altman’s paterfamilias is really the least of their problems. It’s truly something special when a writer (and director) can create a film that covers such serious topics with such levity that it’s consistently funny throughout.

On the It’s An Ordinary Blog movie review scale from 1-10 where one is the worst, five is the best, and ten is the best again, I give “This Is Where I Leave You” a glowing 9.873487187 with an emoticon based sub-ranking of “It feels so wrong to laugh this hard. But it’s right.”

1 thought on “So What Exactly Happens When A Highly Dysfunctional Family Spends 7 Days Together?”