“The Boy Next Door“ 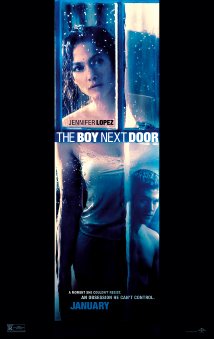 Fans of stalker-thrillers looking for their next fix will likely be flocking to the theater late at night to see the latest film which hit the big screen nationwide today.

But does “The Boy Next Door” hit the spot?!

In the midst of a separation following the infidelity of her husband, Claire Peterson (played by Jennifer Lopez) is emotionally vulnerable when she first meets Noah Sandborn (played by Ryan Guzman), the sexy eye-candy who moves in next door. Noah is, at first glance, the perfect guy. He’s attractive, smart, kind, helpful, and strong so it’s easy to see how Claire is so easily seduced by him that fateful night when her entire world was turned upside down.

After sleeping with Noah, Claire tries to move on with her life. She emerses herself in her work, attempts to patch things up with her estranged husband, and vows never to make the same mistake again but Noah doesn’t share the same desire to let go of their one-time fling. Noah’s infatuation with Claire becomes alarming, things get pretty awkward, and I think we can all guess how the remainder of the story goes…because we’ve seen it before.

Following in the footsteps of predecessors like “Fatal Attraction” and “Swimfan”, “The Boy Next Door” follows a very formulaic script that is highly predictable and leaves you wanting more…of a plot, better acting, and perhaps something new. No matter how attractive the cast is and how steamy the one-time love affair might be, it just doesn’t make up for the lack luster storyline which was this film’s downfall.

Overall, on the It’s An Ordinary Blog movie review scale where one is the worst, five is the best, and ten is the worst again, I give “The Boy Next Door” a 9.350943132095 with an emoticon based sub-ranking of: “Woah, Ryan Guzman is HOT!”