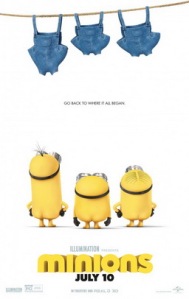 I’ll be the first to admit to you that I actively try to avoid introducing my daughter to shows and movies that don’t provide a lot of educational value. Now that she’s getting older, however, it’s becoming a struggle to keep her away from the “new” and “popular” things that are flooding the toy aisles at my local Target. I didn’t realize just how popular the little incoherent creatures from “Despicable Me” were until my 8 year old niece came into town earlier this summer. She has been begging me for the last couple of weeks to take her to see the new “Minions” movie when it hits theaters nationwide on Friday July 10th.

We had the opportunity to catch an advanced screening of the new film earlier this week and I wanted to take a few minutes to share some of my thoughts on the movie. In case you haven’t seen the trailer for this new film, you can take a peek at it below.

Go ahead and watch it, I’ll wait…

While I appreciated the historical references made throughout a majority of this film (which was set in 1960’s England), I came to realize that there’s a stark contrast between many of the “kids” films that I know and love and movies like the “Minions” that are genuinely just for the little ones. In that same moment, I also came to realize that I can’t give you a review in the same way that I normally would – because I’m not the market that this film is trying to reach. So instead, I’ve decided to fill you in on what the kids thought. 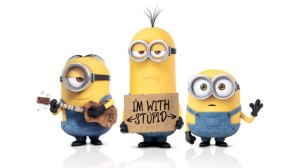 The four (and a half – don’t you forget it) year old loved the bookends (so to speak) of the film but was slightly intimidated by the climax scenes. Once we got through it, she started to enjoy the movie again and ended it by saying that she had a blast, wanted to see it again, and hoped to purchase it once it’s released on DVD.

The eight year old (almost nine, guys!) also loved the movie. Apparently she was already somewhat familiar with the Minions brand before this movie came out so she knew what to expect and this film did not disappoint.

When it comes to certain movies, ones that are truly for younger audiences, the best critics are the kids. The little sample audience of two I brought to the theater with me really seemed to love the film. I’m curious – what do you think about the Minions?!